It's a perfect, sunny morning and you've just reached the first green in regulation. You feel great and you know you're within birdie range. Then, you see them, those little holes in the green. Arrggh! They've just aerified the course, and it's going to ruin your round, right?

Well, maybe not. Consider the fact that PGA Tour legend Tom Watson shot a sizzling record 58 at his then-home course, Kansas City Country Club, just days after the greens had been aerified.

Consider also that aerification is merely a short-term disruption that has long-term benefits for golf courses. When you see them, remember that without those little holes, the greens would eventually die.

Preventative maintenance is an integral part of successful golf course management. Golfers view aerification as an inconvenience that takes the greens out of play for a day, pulling cores from the greens and leaving holes that can affect putting for many days before healing. To add insult to injury, aerification is best done in many part of the country during mid-summer, at the height of the playing season and when most greens are in prime condition.

But a golfer needs to understand how important aerification is to producing healthy turf.

Aerification (also known as aeration) achieves three important objectives. It relieves soil compaction, it provides a method to improve the soil mixture around the highest part of a green's roots and it reduces or prevents the accumulation of excess thatch. 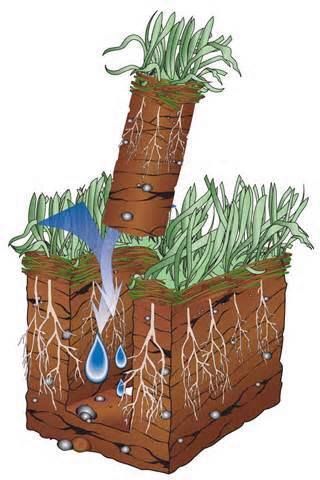 Like so many things, the quality of a good putting green is more than skin deep. In fact, the condition of a green has a lot to do with what goes on below the surface. In order for grass to grow at 3/16-inch, it must have deep, healthy roots. Good roots demand oxygen. In good soil, they get the oxygen from tiny pockets of air trapped between soil and sand particles. 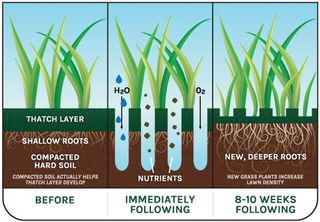 Over time, the traffic from golfers's feet (as well as mowing equipment) tends to compact the soil under the putting green - particularly when the soil contains a lot of clay. When soil becomes compacted, the air pockets on which the roots depend are crushed, and the roots are essentially left gasping for air. Without oxygen, the grass plants become weaker and will eventually wither and die.

Aerification is a mechanical process that creates more air space in the soil and promotes deeper rooting, thus helping the grass plants stay healthy. In most cases, it's done by removing half-inch cores (those plugs you sometimes see near a green or in fairways) from the compacted soil, allowing for an infusion of air and water that brings a resurgence of growth. The spaces are then filled with sand "topdressing" that helps the soil retain air space and makes it easier for roots to grow downward.

Older greens often are constructed of soils with significant amounts of silt, clay and fine organic particles that are prone to compaction. Filling aerification holes with sand improves drainage and resists compaction. The periodic introduction of sand to a green's top layer can, over time, avoid or postpone expensive rebuilding or renovation of greens.

Finally, growing of turf adds to a layer of organic matter on the surface. This layer, called thatch, is an accumulation of dead stems, leaves and roots. A little organic matter makes for a resilient green, but too much invites diseases and insects. Topdressing with sand can prevent thatch buildup, and aerification is one of the best ways to reduce an existing layer and prevent an excess of thatch from becoming established.

There are many types of aerifying machines with different attachments that address different problems in the various stages of the life of a green. So the next time you're ready to scream when the aerifiers are brought on the course, remember that a little preventative maintenance produces the best greens over the long haul.

The bottom line is that aerification is a necessary practice. But before you curse the head greenkeeper for ruining your day, just think of Tom Watson.